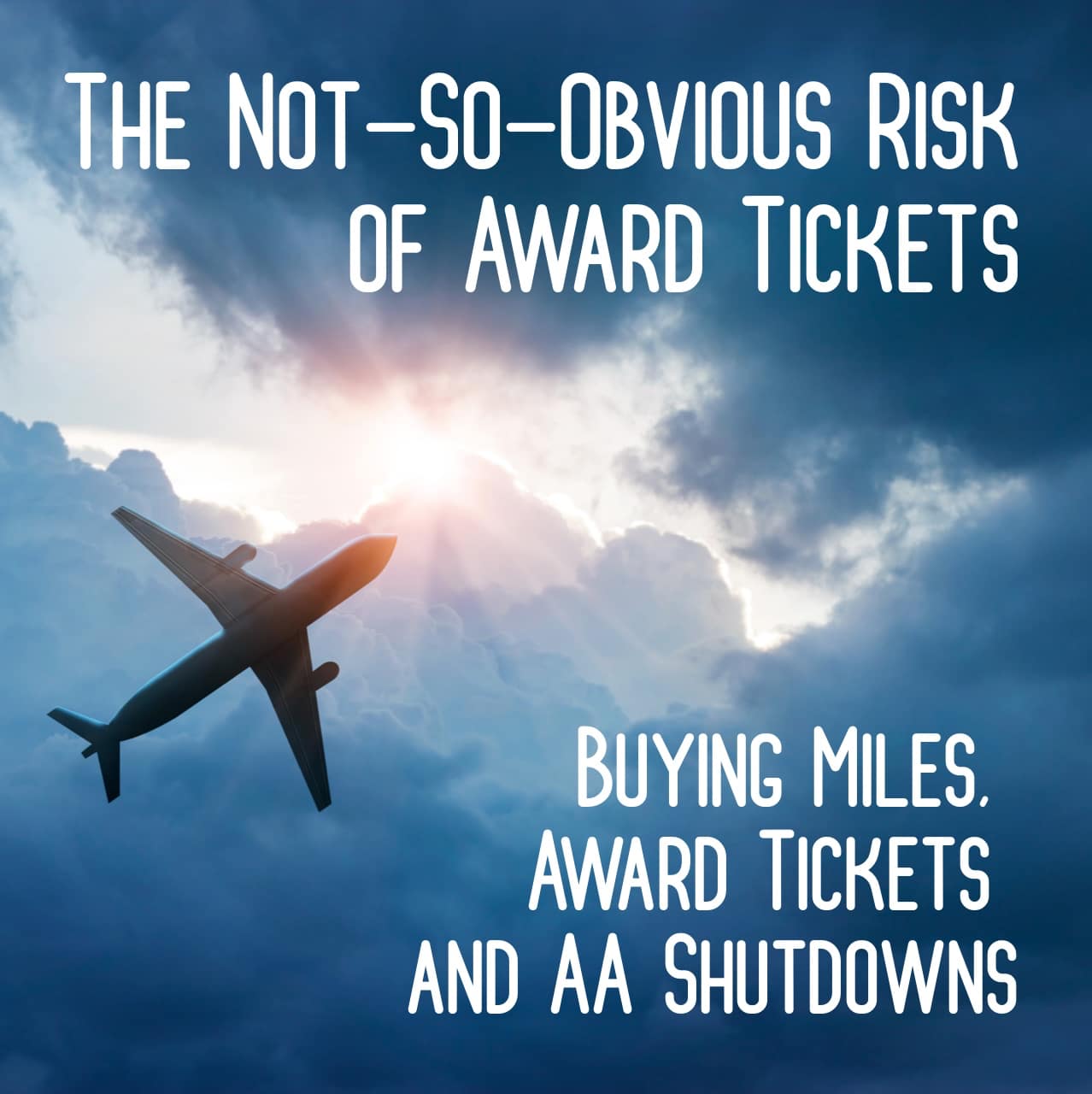 We recently wrote a post on why buying points and miles can make sense.  Our example involved buy Alaska miles for a business class flight on Emirates.  In this post we want to point out a risk when buying miles to book an award ticket. This risk was recently highlighted when American Airlines shut down a number of accounts and cancelled award tickets.

But first, a reminder of why buying airline miles can make sense.

Let’s say you want to fly business class on American Airlines from Los Angeles to London.  The cash price for the ticket is $4550.  If you book with award miles, the same flight is available for 115,000 American Airlines Advantage Miles.

This results in two options

Option #1 – Give American Airlines $4550 for a cash ticket in business class.

Granted, this is a best-case example. American Airline miles are not always on sale, and 115,000 miles for business class from LAX to London represents American Airlines  “saver” availability, which is not always…  available.  But the point is that buying miles can sometimes make sense.

The point of this post is: Going forward, “Option 2” has highlighted risks.

It turns out that tickets which are purchased with award miles, one some level, even though ticketed, don’t really belong to the customer.

American Airlines has been shutting down AA accounts (link), confiscating miles and cancelling existing award tickets which were purchased with AAdvantage miles.   They are citing abusive behavior, and that is a discussion in and of itself.  But watching this unfold highlights that airlines miles and the tickets purchased with them, can be taken away by the airline with relative ease.

“award tickets obtained through an “Exploitive Practice” are in violation  of the AA Conditions of Carriage and are not valid for travel.”

Using the above example, if they cancel your ticket to London, both the flight and the 115,000 miles disappear.  American Airlines keeps the $2139 you paid for those miles.

What About Other Airlines?

In our original post we discussed buying miles from Alaska Air.  Alaska Airlines has a line in their “Contract of Carriage” that allows them to cancel a ticket which falls under “abusive bookings” (Rule 7:D).  I’m guessing that other Airlines have similar language in their terms and conditions.

What Constitutes “Abusive” Behavior? Who Decides?

What if American Airlines determines that paying $2139 for the flight to London, is abusive, when in fact they could get $4550 if you had paid directly with cash?  In that case the customer is using an available avenue to save money but American Airlines considers it as fraudulently circumventing the system.

Does abusive behavior exist?  Yes.  But who gets to determine it?  If the answer is, the airline and the airline alone, then tickets purchased with miles are at risk for confiscation without easy recourse by the customer.

At this point, our focus is not on AA in particular, but the bigger issue of the fragility with which airlines points can be taken away. If an airline can decide that the customer has used the program in a way they did not intend, and as a result, confiscate miles and cancel tickets, that creates risk for those using the points and miles ecosystem.  This risk has always existed, but the recent AA shutdowns highlight the reality of it.

American Airlines is shutting down accounts and canceling tickets, and in some cases, it may be for good reason.  But this event highlights the fact that airlines miles, even if purchased by a customer, or earned by a customer, do not belong to the customer.  It also highlights a potential fragility for tickets booked with award miles.

We still think that buying airline miles can make sense in certain situations.  But going forward, we need to factor in this recently highlighted risk.

Credit Cards We Use For Online Shopping

How Valuable Is the Rakuten Visa Card?