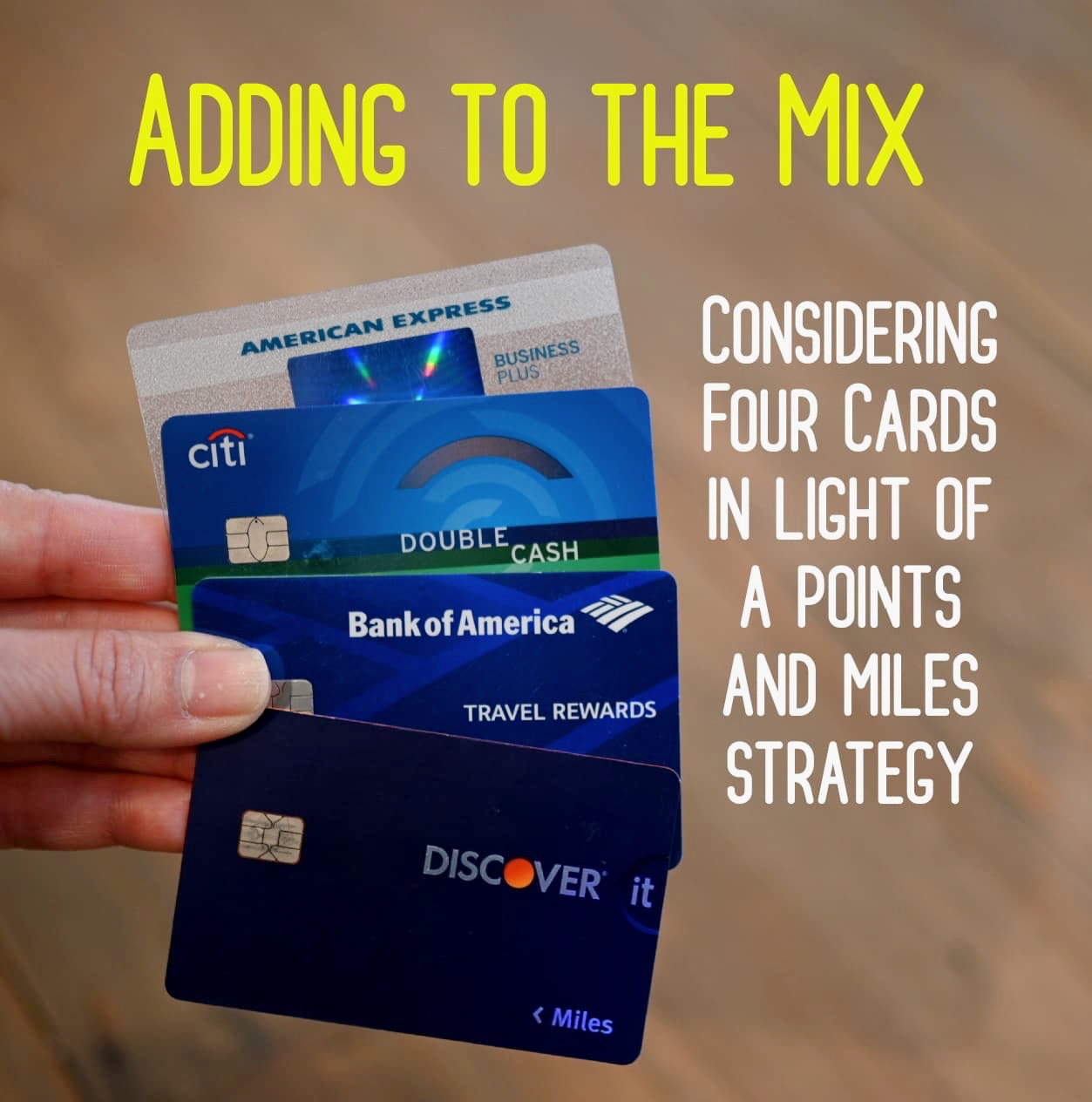 We recently wrote in article in which we compared a cash back card to a card that earns transferable, but cashable points.  For the cashback card we used an imaginary 2% card.  For transferable points we used the Chase Freedom Unlimited.  The article prompted some good discussion.  People brought up cards such as…

Those are four great cards.  Each offers an appealing overall value to the cardholder.  We personally use all four of the above-mentioned cards.  Any of these cards could clearly be included in a comparison. In light of that, I want to share some thoughts on each of the four cards. The following comments stand on their own, but they make the most sense when paired with the original article.

The Discover it Miles Card at 3%

While it’s true that that the Discover it Miles Card generates a total return of 3%, it does so only for the initial 12 months.  In regards to the article, we chose two cards that offered an earn rate which was:

The other thing to note about the Discover card is that its total return of 3% is a combination of two factors. The two factors include:

We wrote an article in which we push on the idea of the Discover card as a “3%” card.  Our main point being:  The first-year value of the Discover it Miles Card, needs to be evaluated in terms of how the 3% is delivered: As a combination of both the ongoing earn rate, plus the value of the one-time, lump sum, bonus.  As such, it should be compared and contrasted to the total first year value proposition of alternate cards.

Earning 2% via the Amex Blue Business Plus is a good value, but the 2% applies only to the first $50,000 of annual spending.  Starting a $50,001, it begins earning 1%. $50,000 may be plenty of capacity for some, but we wanted to compare two cards with uncapped earn rates, the Chase Freedom Unlimited met that criteria.

The Path For Cashing Out Points

We won’t go into details, but the process requires a Schwab Amex Platinum Card, and a Schwab account.  The good news is, once the path is place, Membership Reward points cash out at 1.25 cents a point.  That means for the first $50,000, the Amex Blue Business card is earning 2.5%. But if one picks this cash out path, there is a cost, not just in hassle factor, but in dollars.  The Platinum card comes with a $550 annual fee.

Once we factor in the cost of these annual fee, the math changes. Assuming I max out the full 2x capacity of the Amex Blue Business card,  I will be spending $50,000 dollars and in return,  earning 100,000 Membership reward points.  These 100,000 Membership Reward points can be translated into cash via Schwab at a rate 1.25 cents apiece.   At this rate the 100,000 points convert to a dollar amount of $1250.  So far so good, I’m earning 2.5 cents per dollar spent.

Adding in the Cost of the Annual Fee

The Platinum Card May Provide Other Value

Someone may find other value in the Platinum card that help offset the $550 annual fee.  The card comes with lounge access, travel benefits and credits.  But those benefits and credits don’t show up along the direct path from which a Membership Reward point is translated into cash.

If you have a Schwab Platinum card laying around for other reasons, and as an added bonus, can access it cash out points, a return of 2.5 cents per dollar point, it’s not a bad way to go.  On the other hand, if you’re are starting from scratch to assemble a path to turn points into cash, this path assembles at a cost.

To also be fair, in our previous article we noted that, the Chase Unlimited Card also needs a second credit card to unlock functionality.  Not functionality to turn points into cash, but to transfer points to travel partners.  Which brings us to the Citi Double Cash.

The Citi Double Cash card earns 2 points per dollar spent. This earn rate is uncapped, and as such, makes it a good comparison to the Chase Freedom Unlimited.

Similarities with the Chase Freedom Unlimited

The similarity continues in that both the Freedom Unlimited, and the Double Cash, require the addition of a second credit card in order to unlock transferability.  And (as similarity continues) in both cases, this second card can be procured for a $95 annual fee.  We can pair the Citi Double Cash with the Citi Premier, and team up the Chase Freedom Unlimited with a Chase Sapphire Preferred.

Is the Double cash a better value?

It depends on the value one places on Thank You points versus the value they place on Chase Ultimate Reward points.

In the article we value Chase Ultimate Reward points at 2.25 cents apiece when redeemed for premium travel.  The Freedom Unlimited earns 1.5 point per dollar spend, yielding an assigned value of  3.375 cents per dollar spent.  If we adopt this valuation, we would need to value Citi Thank You points at greater than 1.688 cents apiece in order for the Double Cash to come out ahead.

Are Citi Thank You points worth 1.688 cents a piece?

It depends on how someone uses Thankyou Points.  Each person could evaluate their own use cases, plug in their own valuations and figure out which card represents the greatest value proposition.

Lastly, let’s look at earning 2.625% through a Bank of America card. A strength of this card is that the 2.625% earn rate is not capped.  But it does come with a hurdle.  In order to earn 2.625%, the cardholder needs to park $100,000 in assets at Bank of America.  This dollar amount may be easy for some, and unsurmountable for others.  In writing the article, we chose two cards which come with a lower threshold to unlock their respective, relative value.

This card offers strong value for non-bonused spend, assuming the cardholder has enough assets to earn Platinum Honors status at Bank of America.  If that’s you, it’s a card to consider.

In our original article we looked at the Chase Freedom Unlimited Card, but all four of the above-mentioned cards offer solid value.  Any of them could be considered in determining a points, miles and cash back strategy. What do you think?

Decide What Type of Reward Points You Want to Begin Earning

How Valuable Is the Rakuten Visa Card?